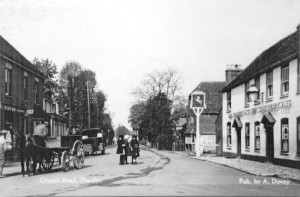 Why is Marden special?

Marden is still a clearly delineated village that has preserved its architecture and structure, with new buildings blending in unobtrusively.

Its facilities and amenities, including a mainline station to London and Europe, make it almost self sufficient, yet very much in touch with the outside world.

As a result Marden has a developed a strong and vibrant community which looks to the future while treasuring its village heritage.

The discovery of a bronze hoard points to the area being inhabited in the Bronze Age. However, it wasn’t until the Romans left and the Jutes divided up the forest of the Weald of Kent that Marden got its name “Meredenne”, a place where herdsmen from the North Kent coast brought their stock in the autumn to fatten up on acorns and beech mast.

By 1085 this clearing in the forest had a church (probably wooden) mentioned in the Domesday Monachorum. By end of the 12th century the Church was being rebuilt in stone and in the 13th century the village was given to Queen Eleanor with the right to hold a weekly market and annual fair. During this time the cloth trade grew as cloth weavers from the continent brought in their skills and the land supplied grazing for sheep and wood for the looms. A number of timber-framed houses date from this period showing the prosperity of the village. Those remaining today are White Lyon House and Turnpike House . Justice was dispensed locally from the Court House built in 15th Century and the stocks were used to enforce it.

The ravages of the Black Death in 1349 had led to economic instability and the Peasants Revolt of 1381. Further unrest followed in 15th and 16th centuries with Marden men involved in the uprisings.

However, the people of Marden have always known how to enjoy themselves. In the 17th Century the Unicorn public house was build and opposite, at the entrance to the Market, White Lyon house also became a pub. Together they were known as the Lyon and Unicorn.

By the 19th century the cloth trade had given way to agriculture on the rich clay soil, including cereals and hops, but bad weather and pests could lead to poor harvests causing poverty in the village. Agricultural riots for higher wages resulted in 1830. The Parish was responsible for Poor Relief and the Workhouse as well as the repair of the roads. The mounting block is a reminder of those days when the people of Marden were reliant on horses to travel.

The new Turnpike Road was completed in the 1780 and the coming of the Railway in 1848 opened up the village to the outside world. By early Victorian times over 2,000 people were living here with a wide range of occupations, centred around farming. As wheat acreage fell, hops and fruit growing became more prominent, and the familiar oast houses and orchards began to dominate the landscape. Education became more important and the National School was built by public subscription in 1860.

In 1894 the Parish Council took over the running of the village, piped water arrived in 1900 replacing the village Pump, gas lighting followed in 1904 and the sewage works in 1933. During the World war 1 and the Depression Marden’s agriculture, particularly the fruit trade, was very important. Local growers formed the Marden and District Fruit Show Society which held its first show in 1933, this became a highlight of the agricultural year.

During World War 2 Marden, like the rest of Kent, was in the front line for the defence of Britain. A bomb destroyed 3 houses in the Maidstone Road killing 5 people, and a V2 shot down by anti-aircraft fire landed in the army camp in Pattenden Lane killing 11 people.

Until the early 1960’s when mechanisation took over, the arrival of the hop pickers in their thousands in September was a major event which is still remembered with affection. The present day Medical Centre sits on the site of the old Hoppers Hospital, built in 1930 to serve the needs of this cheerful army of workers: a striking example of a benefit for the present coming from Marden’s heritage of the past..

In 1981, the village was proud to celebrate this heritage when the village sign was designed and erected, featuring our beautiful Church, the Pump, the Stocks, apples and hops.

Marden, a village with a heritage to preserve